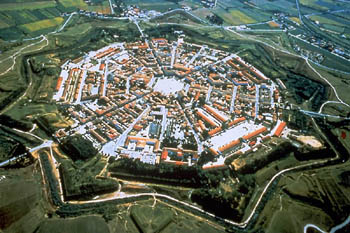 Palmanova, town in northeast Italy close to the border with Slovenia . It was build according humanist and military specifications, it was supposed to be inhabited by merchants, craftsmen . However no one choose to move there . Since 16 century!!! it is an empty city- Look at the picture. For more info check wikipedia/palmanova . Here is paragraph from wiki.”

“The shape also comes from cosmological ideas, reflecting the religion of the day. It is believed to be the most perfect of all geometries, because the radii are equidistant at all points, and it is a mirror of a harmonious cosmic order. In the Catholic religion, as well as the pagan religions Catholicism supplanted, the circle is the basis of everything created. It represents perfection, as well as the cycle of life and death. What this means is that the circular shape also works to imitate nature, thus appearing to blend into the surrounding countryside instead of sticking out in the landscape the way most cities do up until this very day. The designers intent was more than mere camouflage, they meant for the city to be in harmony with the divine.”

From Feng Shui point of view there is no place to receive the Qi.

Solution: An open field like a Ming tan or bright hall followed by the entrance to the city and also a structure forming a bay in order to suck the Qi which would ideally come from a good mountain range

My passion is to help you make a better Life. With this blog i want to have Conversations about Feng Shui with you. I know full well the variety of difficulties that people in any business can encounter, as well as the personal roadblocks that hinder us.

There are forces around us that we cannot see, but that we can harness. I believe that the practice of Feng Shui  is the most elegant and potent example of using the visible to optimize the invisible.